I was listening to a radio interview on the topic of creativity and one  statement stuck in my brain.  Four days later and I’m still thinking about the theory that sad people are the most creative people.  At first I thought of tortured artists like Van Gough and Pollack but weren’t they dealing with more than mere sadness?  OK, perhaps I am getting too analytical.

When I was sad, I didn’t feel the creative spirit pouring out of me.  I was tired and cried all the time.  My most creative venture was getting dressed—if there was anything clean to wear! If I was really creative I could a make dinner out of supplies in the pantry.

Why would sadness unleash creativity?  My theory is that the INNER CRITIC voice may be dampened to the degree that creativity sees an opening and feels safe to explore.

Blessings did arise from my sadness.  Through cognitive behavior therapy, I learned how to work with my emotions and completely embrace myself.  I am a work in progress, don’t get me wrong, but I start each day grounded in gratitude and seeking happiness.

My Girlfriend Voice (MGV) came to light during my sadness.  I noticed I had this soothing, compassionate voice in my head.  For example, if I was contemplating how to handle a snarky comment from my former boss my MGV would say, “You can go down to their level or just let it go.  You’ll make the right choice”.    The choice was mine.  I love having choices!

Had I listened to my inner critic that day, it probably would have said, “Here we go again.  Why do you put up with this crap? Why don’t you have a new job?  Are you too lazy to look for one?  You should……  Why don’t you…. OMG!  Loser.”

I came to realize that the words the inner critic was delivering to my head were so harsh, things I would never dare utter out loud to another person.  Why would I talk to myself in such an abusive way? My inner-dialogue, lacking any sort of compassion or trust, shredded my self-confidence and squashed my objectivity.  It was a form of self-mutilation because words are weapons.

The more I listen to MGV, the less I hear from my inner critic!! 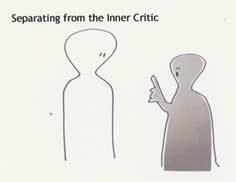 It would be unrealistic to think I could completely eliminate my inner critic.  Perhaps there is something important buried in those harsh words?  Again, it is my choice to take what I want and leave the rest behind. I’ve tried giving my inner critic an appointment time– like the DMV.  I tell her I’ll listen with undivided attention as long as what she says is helpful, kind or beneficial.  I’m not into whining or belittling but rather finding a solution.  Funny, she hasn’t come to call nearly as often.  ♥

Receive "My Girlfriend Voice" Directly to Your Inbox-- YES!!!

Join our growing community of brilliant women (and a few wise men) as we support one another on our journey to rediscovering and living a bold, beautiful and badass life!

You’ll be the first to hear about new blog posts and special events. (And I promise not to fill your inbox with useless information!)

And just so it's clear; I treat your info as sacred.  No selling or sharing my contact list.

You have Successfully Subscribed!